I saw Zoolander 2 today, and pretty much hated it. But it got me thinking, what are the worst comedy sequels (and there are a lot) ever made? Well, here’s a list to find out. 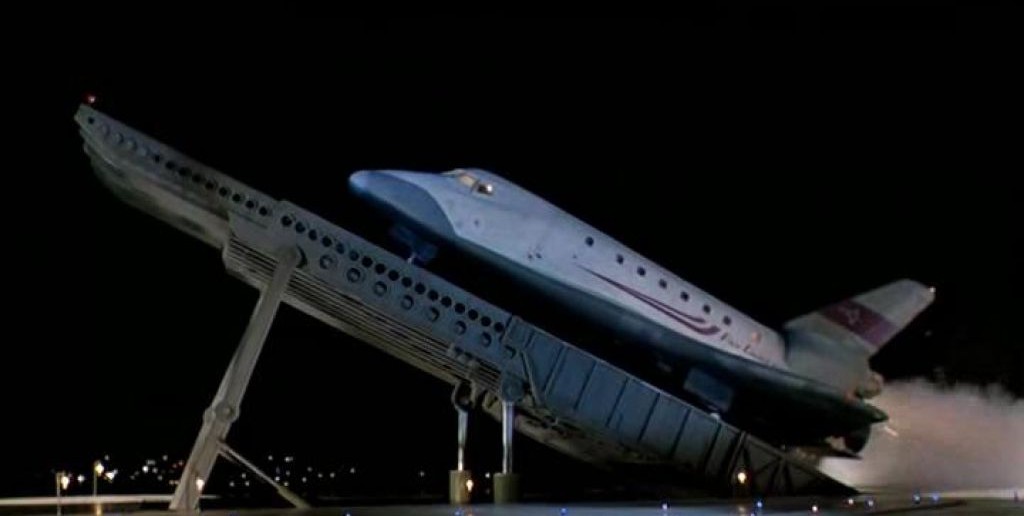 Airplane II: The Sequel! isn’t an atrocious film. But it’s far from a good one, and an entire universe away from the absolute comedy classic that is Airplane! (arguably the funniest movie of all time).

Without Leslie Nielsen on board, and the genius Zucker brothers and Jim Abrahams who wrote the first film, Airplane II was always going to be a mess, and so it turned out. Set in a near future where regular shuttle services between Earth and the Moon are running, ex-pilot Ted Striker is on board the one where it all goes wrong. Again.

Like I said, Airplane II isn’t the worst comedy you’ll ever see, and had there never been an original, it might not be so reviled, but the fact remains that it’s just not funny. Either relying too much on the exact same jokes as the last film (i.e. Ted’s drinking ‘problem’), or just going for gags that are nowhere near as clever as the brilliant original parody, it’s tough to really laugh at Airplane II, save for the odd moment, so steer clear of it and just rewatch the first Airplane!

Remember the absolute classic, The Blues Brothers, from 1980, with Dan Aykroyd and the unforgettable John Belushi? Well, they did a sequel 18 years later, called Blues Brothers 2000. Yeah.

Although the sequel was written by Aykroyd and director John Landis, who penned the original too, there are few movies that miss their established mark by as much as Blues Brothers 2000. Completely lacking any of the mad, rebellious and off-the-chain humour that made the first film such a uniquely energetic watch, the sequel is simply a bore.

What’s more is that John Belushi, who sadly died in 1982, is replaced by John Goodman. Now, Goodman’s a great actor, and bear in mind that this was the same year he did the brilliant The Big Lebowski, but it’s difficult to live up to Belushi’s performance in the original Blues Brothers. That film in general was hilarious, but the stand-out was easily Belushi’s insane acting in contrast to Aykroyd’s straight-talking and calm performance. In Blues Brothers 2000, however, Goodman can’t match that, and so that brilliant odd-couple chemistry, and a chunk of the best humour, is completely lost.

There needs to be a rule in Hollywood where you can’t make a comedy sequel after a certain amount of years. That would stop films like Dumb And Dumber To, which came out 20 YEARS after the original, ever being made.

This film shows so clearly why so many comedy sequels don’t work. For one, Jim Carrey and Jeff Daniels aren’t at height of their comedic powers nowadays, so watching them try to act like the young idiots they once played back in 1994 is not only not funny, it’s pretty depressing.

But that’s not the worst thing about Dumb And Dumber To. Quite simply, its comedy is outdated and simply disgusting. Whether it’s still referencing mid-90s pop culture, or just being plainly mean-spirited, thanks to a heap of racist, sexist, homophobic and all other sorts of jokes, watching this sequel is a real chore from start to finish, and an experience you’ll want to end as quickly as possible.

You’d think a movie coming off the back of one of the funniest comedies of the 2000s, Bruce Almighty, and starring modern king of comedy Steve Carell in the lead, would be great. You’d be wrong, because that movie is Evan Almighty.

Jim Carrey doesn’t return for the sequel, and only one of the original writers is back, so it was almost inevitable that this movie would fail. But it wasn’t expected to fail as hard as this. Mostly lacking the zany, quick-fire gags that made the original so funny, as well as failing to give as impressive a satire on religion, it’s difficult to find anything to laugh about in Evan Almighty, despite the best efforts of its leads.

That’s partly down to the fact that the focus of this film was slightly distracted. When it should have been all about more good laughs, they went way overboard going for big-budget special effects. So big were the effects that the budget for Evan Almighty (a simple comedy) was over $175m in total. That mammoth budget also meant the film lost money at the box office, a gross worsened by allegations that animals on the set of the film were treated poorly. All did not go well for Evan.

Another example of why, after a set period of time, we should just leave comedies alone. Zoolander 2, released 15 years after the original Zoolander, was a horrendous sequel.

Despite featuring the return of Ben Stiller as writer, director and lead actor, Zoolander 2 fails on a consistent basis to make you laugh, with almost 100% of the jokes falling flat on their face. The main reason for the sequels extreme poorness was due to the failure to emulate the hilarious character-driven comedy of the first movie, and an amazingly poorly-written story that’s almost impossible to follow coherently.

Watching Zoolander 2, however, you can tell that the writers were clutching at straws for cheap laughs, relying unbelievably heavily on celebrity cameos at every moment. All in all, there are around FORTY cameos, from the likes of Justin Bieber to Susan Boyle, and pretty much all of them aren’t one bit funny. Steer clear of this sequel, and go back and watch the brilliant original.

Yes, it’s another Ben Stiller movie, but he’s made some great comedies, don’t let this completely write him off. Anyway, Little Fockers. The third film in the Fockers series that came six years after we thought it was all over.

Although most of the original cast returns, and we get more of the classically tense relationship between Robert De Niro and Ben Stiller’s characters, this is another one of those sequels that, thanks to only featuring one of the original writers, just can’t live up to the previous films.

Little Fockers isn’t just unfunny, but also simply dull. Whilst the first two movies played with cringeworthy family humour brilliantly, this never delivers on the same level, and becomes a succession of various celebrities getting involved in random sticky situations that we’ve both seen before, and never asked to see again. Hopefully, this is the end of that series, because Little Fockers was a real disappointment.

You’d think that after managing to make an entire movie about messing around with a dead guy’s corpse, the makers of Weekend At Bernie’s would have cut their losses and ended it there. But they didn’t, and so we got Weekend At Bernie’s II. You know what’s coming.

Bearing in mind the fact that the original Weekend At Bernie’s isn’t the funniest comedy you’ll ever see, just an easy, light-hearted romp, any attempts at a sequel were guaranteed to fail, and so it did in 1993, where we got nothing more than the same characters messing around with the same dead guy’s body (which, after six years, I thought would have decomposed), and a simply tedious and pointless comedy.

Whilst the first movie sits comfortably at an average 52% on Rotten Tomatoes, Weekend At Bernie’s II has a score of just 10%. Seeing as it just rehashes and draws out the same joke from the first film for a further 98 minutes, and doesn’t build on it in any way, there was no way that this sequel would perform, making it a really dull and frustrating watch.

Superbabies: Baby Geniuses 2 is by far the worst film on this list. I gave it a 1.1; that’s how bad it is. The only reason it’s not at number one is because its predecessor was so bad as well, but to be honest, if you go into a film called Superbabies expecting laughs, there’s something wrong with you.

Apart from the fact that Superbabies 2 features some of the most horrific dubbing you’ve ever seen, completely out of sync with all of the characters’ mouths, it’s a painfully dull and annoying film that relies entirely on you thinking that the babies are cute to force some entertainment.

But no matter how much they dress up these babies and give them ‘adorable’ voices, it’s pretty impossible to see past the atrociously bad dialogue and comedy that plagues this film from start to finish. Again, it was completely inevitable that this film would be awful, but I have to say that, of all the films on this list, I recommend you watch this one. Just to say you’ve done it. You’ll come out a stronger person afterwards.

How could we have a worst of comedy list without meeting our old friend Adam Sandler? Grown Ups 2 (actually the only sequel Sandler has done), was the pathetic return to the lives of the boring middle-aged manchildren that we met in the equally terrible Grown Ups.

Quite simply, everything about Grown Ups 2 is just as bad as the first film, but what makes it an even more painful watch is the knowledge that, despite the awful reviews for the original, they went with the exact same, tedious, dull and unfunny formula to make another appalling comedy.

Yes, it may have made nearly $250m at the box office, but there’s no denying that Grown Ups 2 is everything we hate about comedy sequels. Unimaginative, boring, completely reliant on toilet and gross-out humour, and endlessly unfunny. It’s not the worst Adam Sandler movie ever (although there is some insanely tough competition for that title), but it is a genuinely awful film regardless. AVOID.

1980’s Caddyshack is one of my favourite comedies of all time. But its sequel, 1988’s Caddyshack II, is unspeakably poor.

Although some of the cast, namely Chevy Chase, return, the sequel doesn’t feature the two best parts of the original film: Rodney Dangerfield and Bill Murray. Without those two, this film is completely lost, and despite its attempts to emulate the unique zaniness of the original,  it fails EVERY. SINGLE. TIME.

There’s nothing to laugh at in Caddyshack II, but because of its failed attempts to carry out the insane farcical comedy of the original, it becomes really, really annoying. Winning two Razzies, losing over $8m at the box office, and sitting all the way down at 4% on Rotten Tomatoes, you can see how hated this film is. And what makes it all more staggering is that it shares the same name as the brilliant original. So there you go, Caddyshack II is the worst comedy sequel of all time.