Sometimes, you’re in the mood to get sad, and these are the films that will do just that: the top 10 movies that will make you cry.

Clint Eastwood’s Best Picture-winning sports drama ‘Million Dollar Baby‘ is an inspiring tale about a woman rising through the ranks of the boxing world to become a great of the sport against all odds.

At the beginning, Hilary Swank’s character Maggie Fitzgerald is a weak wannabe boxer, who is not receiving the support of desired trainer Frankie Dunn, played by Eastwood. However, he eventually takes her on, and ultimately turns her into an all-star of the female boxing world, helping her to achieve her dreams.

When you’ll cry: Out of the blue, however, Maggie falls on a stool during a fight, and becomes completely paralysed, relying on a breathing tube to survive. Her career is ruined, and her dreams are shattered, and with no real hope of ever returning to the forefront of boxing, she asks Frankie to turn her breathing machine off. Despite wrestling with the morality of the decision, Frankie decides to fulfil Maggie’s wish, and in a devastating final scene, lets her die.

Forrest Gump is a highly-loved family drama that features one of the most loveable characters in all of film history, played brilliantly by Tom Hanks.

It details the life of Forrest, a simpleton from the Deep South, who unknowingly takes part in some of history’s most iconic events, whilst he tries to locate his lost childhood love, Jenny.

When you’ll cry: The film features two sequences worth crying at, in two different ways. On the one hand, early on, we see a young Forrest shed his leg braces as he runs away from a group of bullies to the sound of the iconic quote: ‘Run, Forrest, run!’, a truly wonderful moment that will bring tears of joy to your eyes.

On the other hand, later on, once Forrest has become a wealthy business tycoon by virtue of the Bubba Gump Shrimp Company, he returns home to find his mother, who has led him and given him drive throughout all his life, is unwell. Unfortunately, she passes away, leaving Forrest perplexed as to how he could live on without his mama, but still feels encouraged to go on in her honour.

50/50 is one of the most impressive films ever made, because it’s a comedy about cancer. That’s not an easy thing to do, but they pull it off by making a hugely entertaining and funny film that is perfectly balanced with human drama and emotion.

The performances by Joseph Gordon-Levitt, Seth Rogen and Anna Kendrick in these pretty dramatic roles are fantastic, and whilst the bulk of the emotion comes from Gordon-Levitt’s character, Adam, being diagnosed with cancer, the detailing of the fracturing relationship between him and Rogen, two best friends, is hugely intriguing.

When you’ll cry: It’s a gradual progression into heavy-hitting emotional drama, and from the initial diagnosis to the breakup of the main friendship, this film will begin to tug at your heartstrings. However, when it gets to the heartbreaking final sequence where Adam’s physical state has completely deteriorated, and it appears as if he’s about to die.

The clue’s sort of in the name, but when you watched this film for the first time, you really didn’t see the insanely powerful emotional punch at the end of Me And Earl And The Dying Girl coming.

The story is a pleasantly offbeat and original story of a friendship between an awkward teenager and a girl diagnosed with leukaemia. Unlike films like The Fault In Our Stars, however, the story avoids predictable teen romance and just shows a very real, human friendship.

When you’ll cry: Throughout the film, you’re constantly reassured in the narration that this girl won’t die, so when it comes to the final sequence, where she really is on her last legs in hospital, it’s astonishingly powerful. The boy skips his high school prom to go and see her in hospital and show a film he made especially for her. When his film reaches a climactic point however, as the music begins to soar, she falls into a coma, and unexpectedly dies soon after.

A documentary that will make you cry? That’s right! Senna is the story of legendary Formula One driver Ayrton Senna, and his rise to become one of the greatest men ever seen in the history of the sport.

The action-packed and fast-paced doc details Senna’s career in incredible fashion, from his off-track life working with poor areas in his home country of Brazil, to his iconic on-track rivalry with former teammate Alain Prost.

When you’ll cry: Once you reach the highs of Senna’s life, as he takes a third World Championship in 1991, his career takes a downturn before the devastating final season in 1994. At the San Marino Grand Prix, Senna was killed in an accident during the race, and the film shows this tragic moment in amazing style. With beautifully sombre music and images of the reactions of Senna’s family and friends to his shock death, it’s almost impossible not to tear up when you watch it.

Pixar has an amazing history at messing with your emotions, and there’s no film where they do it more directly than Inside Out.

The film is the story of an 11 year old girl, Riley, going through a difficult period in her life, and the emotions inside her head who attempt to salvage her from a somewhat depressed state.

When you’ll cry: Although the film is a wonderfully enjoyable family affair, anyone over the age of 15 will probably find themselves tearing up at numerous occasions right the way through this film. It plays beautifully on childhood nostalgia, and in scenes like the moment where Riley forgets her imaginary friend forever, it’s impossible not to burst into tears remembering your own childhood.

And then, in the final moments of the film, Riley attempts to run away from home, only to remember how much she misses her parents and go back. The moment when she arrives back home to her massively worried parents, they all hug, and that sends you as a viewer into a complete meltdown of emotions, mixing the joy of her return and the devastating sadness of the previous sequence where you thought it was over for Riley.

Yes, it is over three hours long, and yes, you do have to wait about an hour and a half to actually get any proper emotion and drama, but Titanic still remains one of the most iconic films that will make you cry.

It’s the story of the impossible love between a lowly peasant and an upper-class girl on board the doomed passenger ship RMS Titanic in 1912, and whilst it may take a while to get going, the relationship is brilliantly established to give maximum power in the tragic final act.

When you’ll cry: The ship hits an iceberg and begins to sink, and although the two main characters hang on right until the moment the boat goes underwater, they find themselves stuck in the freezing Atlantic waters amongst the dead bodies of other passengers.

And then, seeing as they can only find a piece of driftwood (apparently) big enough for one of them, Jack, played by Leonardo DiCaprio, sits in the water as the await rescue, but unfortunately freezes to death, leaving his love alone. But, in one final burst of hope, she sees a boat collecting survivors, and desperately blows a whistle to attract their attention, managing to save herself as she lets Jack sink into the sea below.

Toy Story 3 isn’t the best of the Toy Story films, but its reputation as a great has been cemented by its iconic heartbreaking final scene.

Set years after the previous films, when Andy is going to college, the toys find themselves sent to a daycare centre ruled by an evil teddy bear. That’s all a pretty fun story, but it’s nothing in comparison to the way this film finishes off.

When you’ll cry: Firstly, the toys escape the daycare centre, but find themselves trapped in a huge incinerator. As they slowly move towards their deaths with no hope of escape, they all join together and hold hands in one final act of solidarity, making you immediately burst into tears.

However, even that doesn’t compare to the final moments. The toys escape the incinerator, but return home to find that Andy is giving them away to a neighbour’s young daughter. Then, there’s an incredible moment where Andy hands over the toy box to the little girl, but not before rethinking all the good times he’s had with them, leaving you as a viewer blubbering like an idiot. It’s a really powerful scene, though, and you should cry at it. 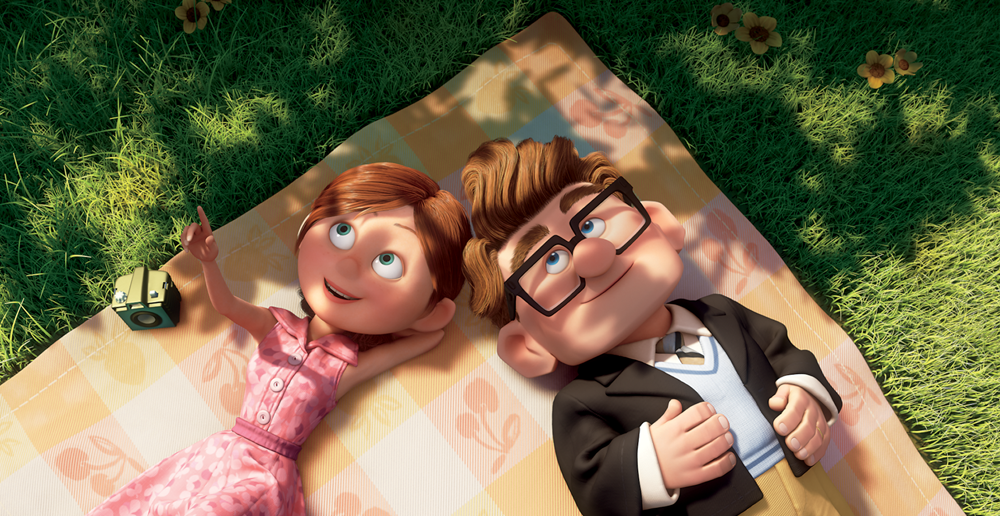 One of the most original knockout blows Pixar has ever dealt, Up is a hugely impressive comedy-adventure drama with beautiful animation and one incredible sequence.

The film is about an old man, Carl, who flies off to a forgotten land in South America called Paradise Falls with a boy scout at his side in his house by attaching millions of balloons to it. However, 99% of the film isn’t really worth crying at.

When you’ll cry: The film opens with Carl meeting a young girl named Ellie, who shares his sense of adventure, and within five minutes, we embark upon one of the most incredible pieces in cinematic history. A montage that begins with an adult Carl and Ellie getting married begins to play out their entire life story over the course of a few minutes.

With a superbly beautiful score behind it, and a devastatingly sad conclusion to the montage when Ellie dies of old age, this is pretty much pure cinematic perfection. It’s a few minutes that tells a greater story than so many entire films without even using any dialogue, just a beautiful song and a touching story that will easily have you in tears within seconds, a real shock opening to the wonderful film.

I haven’t seen Grave Of The Fireflies again since I first watched it about two years ago, but even writing this is making a few tears well up.

The film, made by Studio Ghibli and directed by Isao Takahata, is the story of a orphaned Japanese brother and sister who try everything to survive in the final months of World War Two.

When you’ll cry: The entire film is easily the most devastating thing you’ll ever see, and the desperation that these siblings turn to in the situation is truly heart-wrenching to watch from start to finish.

But there is no moment in history like the finale to this film. After resorting to living in a cave on a river bank with nowhere else to go, the young girl unfortunately dies of malnutrition. What follows is a haunting but touching sequence which shows her ghost frolicking and playing on the riverside, as a melancholic opera tune overwhelmingly plays in the background.

Then, the brother puts her dead body in a wooden box, and has one last look at her face before closing the box and putting it on a fire, cremating her. The music builds to a crescendo as flames rise into the sky whilst he sits beside for hours upon hours, until she is finally reduced to ashes.

It’s nothing graphic at all, but it’s a piece of wonderfully powerful art that will undoubtedly leave you in floods of tears. It is truly astonishing.