She’s one of the most iconic actresses of all time, but what really are the top 10 best Audrey Hepburn movies? Let’s find out…

In only her second Hollywood starring role, Audrey Hepburn lines up alongside the great Humphrey Bogart and William Holden in the romantic comedy ‘Sabrina‘.

Sabrina, a light-hearted but not incredible film, was arguably the movie that really put Hepburn on the road to success. Following her breakthrough in Roman Holiday with Gregory Peck in 1953, her brilliant performance in Sabrina showed that she was able to hold her own against the titans of Hollywood, and was more than the pretty little princess of Roman Holiday.

A decade into her career, Audrey Hepburn unexpectedly took the lead role in the film adaptation of ‘My Fair Lady‘ as Eliza Dolittle. Julie Andrews of Mary Poppins fame was supposed to get the gig, seeing as she starred on stage with Rex Harrison, who made it into the film, but Hepburn’s star power put her in the role.

The film itself is a little overlong and slow-moving, but Hepburn’s performance was as delightful as ever, as she managed to pull off some singing (although a lot was dubbed by Marni Nixon), a weird Cockney accent, and did her best to answer the critics who wanted to see Andrews in the role. This is one of Hepburn’s most iconic roles, and it definitely deserves a watch.

Although she said that the film was easy to make, Hepburn also admitted that that ‘doesn’t mean it’s going to be very good’, Paris When It Sizzles is still a fluffy delight to watch.

Audrey Hepburn did at one point say making the film was ‘a joy’, and if you do watch this, take it as light-heartedly as you can. This is a weird, non-linear romantic comedy with random Tony Curtis cameos and a drunk William Holden, but the eccentric performance by Hepburn is one of its most delightful qualities, turning a possibly lacklustre film into a beautifully fun one.

In contrast, Hepburn said that 1959’s The Nun’s Story was one of her favourite films, as well as one of her most successful.

The film, about a young woman in a convent rising to become an established nun, is an epic tale, and one that detracted from Audrey Hepburn’s continual slew of Parisian romantic comedies, but it was one of the first examples that she was a truly great actress and not just a pretty face, taking on a hugely dramatic and intense role and delivering brilliantly, receiving an Oscar nomination in the process.

Towards the end of her main Hollywood career in the late 60s, Audrey Hepburn was still going with some wonderful films, ‘How To Steal A Million‘ being one of them.

In this heist-romantic-comedy, Hepburn and co-star Peter O’Toole go about stealing a prized piece of art from a Parisian gallery in the most hilarious of ways, making it by far one of her laugh-out-loud funniest films.

What’s more is that the film is a must-see for fashion fans, as Hepburn’s colourful wardrobe for the feature was designed by the fashion designer Givenchy, really popping on screen as much as her performance.

The 1957 romantic comedy, ‘Funny Face‘ set in, yes, Paris, features another hugely impressive turn by Hepburn. She stars alongside Fred Astaire in a musical dance extravaganza about a young book clerk who is taken to Paris and turned into a top fashion model.

The film isn’t the most original thing you’ve ever seen, but at least we get to see some brilliant dancing from Audrey Hepburn and Fred Astaire, hugely colourful directing by the legendary Stanley Donen, good laughs throughout, and Hepburn actually getting to do her own singing, unlike in My Fair Lady.

Similar to The Nun’s Story, 1967’s survival thriller ‘Wait Until Dark‘ was a brilliant display of Hepburn’s acting versatility and class.

Based on a 1966 play, the film revolves around Hepburn, playing a blind woman, who is terrorised by three criminals in search of a drug-stuffed doll, and is hugely thrilling and intense to watch from start to finish, with Hepburn brilliantly holding up in a horror movie role that no-one saw her succeeding in, picking up her fifth and final Oscar nomination for the performance.

Of all of the films she ever starred in, however, Stanley Donen’s ‘Two For The Road‘ is by far Hepburn’s most original and impressive.

Told as a non-linear narrative, the story follows Hepburn and co-star Albert Finney as a married couple over ten tumultuous years of their relationship, and is one of the most impacting, amazing and still delightful films you’ll ever watch.

Not playing her usual innocent young girl type character, Hepburn gives a much more mature and dramatic performance in this romantic comedy-drama, and is absolutely sublime every minute of the way, helping hugely to make for an incredible viewing experience that you need to watch now if you haven’t.

Surprised? I don’t blame you, because ‘Breakfast At Tiffany’s‘ is by far Audrey Hepburn’s most renowned role of all time.

Based loosely on Truman Capote’s novel, Hepburn plays notorious New York socialite Holly Golightly in a love story alongside George Peppard that will absolutely delight you.

From the weird and wonderful outfits she wears to the hilarious comedy and beautiful theme ‘Moon River’, Breakfast At Tiffany’s is a massively likeable and easy-going romantic comedy that still gives you a good bit of depth and intrigue as it powers along. This one is a classic and it’s not to be missed. 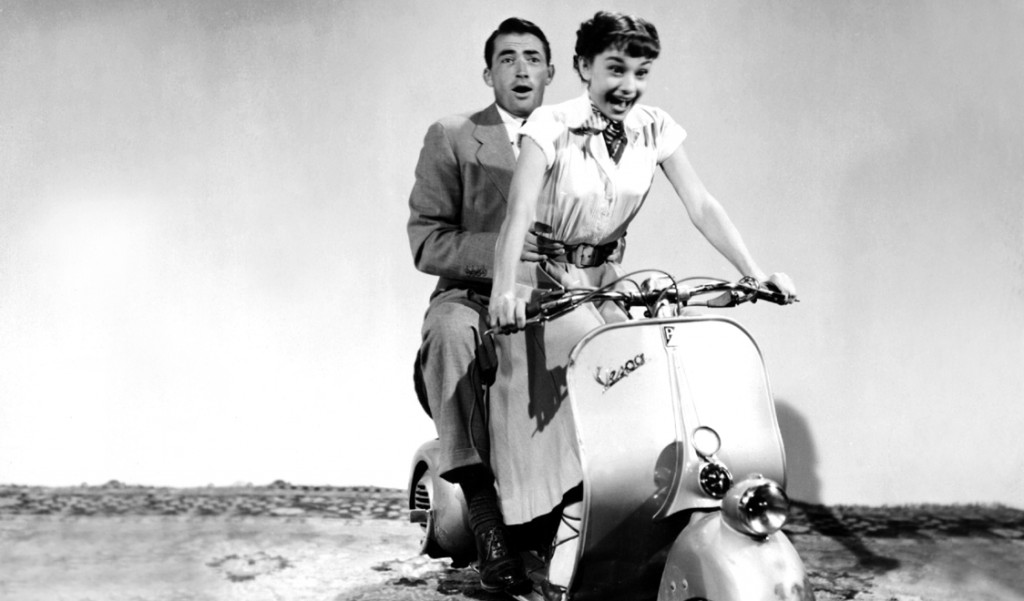 And for all the brilliant work that she’s done over her illustrious career, it’s still the brilliant breakthrough performance Audrey Hepburn gave in 1953’s ‘Roman Holiday‘ that is her best.

This film is basically genesis when it comes to her self-created romantic comedy genre, featuring an energetic and hugely joyful performance as a frustrated young princess, wonderful chemistry with her incredible co-star Gregory Peck, crazy comedy, brilliant directing by William Wyler amongst the beautiful sights of Rome, and an uplifting and positive vibe throughout that makes this an infectiously adorable film as well as her most iconic, and her best.