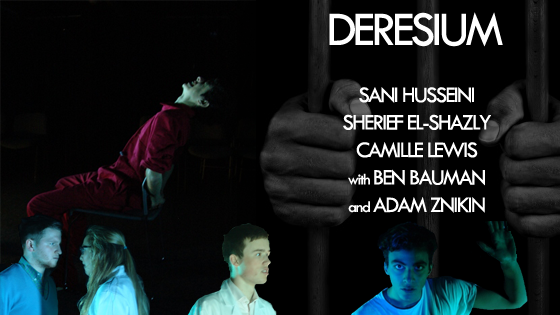 Deresium is a British play, performed by Ibstock UVI, that details the atrocities in prisons where scientists are testing on prisoners to create world-changing new drugs, until one experiment goes too far.

Well, this was an incredibly tense, hard-hitting and enthralling play. A thrilling script coupled with some terrifyingly creepy performances come together to make one of the most engrossing half an hours I’ve ever spent watching a play, convincingly bringing to light the horrific atrocities that can occur in many jails nowadays.

To kick off, the most impressive thing about this whole play was the excellent creation of this very suspenseful, eerie atmosphere. While the story following the effects and ordeals happening during the experiments was hugely exciting in itself, there’s a consistently dark and tough undertone beneath which makes this a really solid and strong watch.

Along with that, the portrayal of the experiments was dramatic, petrifying and fascinating. I was often shying away from some of the more brutal scenes such was their intensity, however I was still totally enthralled because it was so shocking to see such a horrific display of these experiments, so above all, this was a really well-written play.

And even while some of the more fictional plot lines of this play were totally preposterous, along with an insane but still intriguing dream sequence, I was totally captivated, meaning that I believed anything this threw at me, no matter how weird and supernatural it seemed to get towards the end.

Meanwhile, the technical aspects of this play were also brilliant. The lighting was utilised to almost perfection, helping to reinforce the dark, eerie undertones of the play, while I was really impressed by how it was used in some of the interview scenes, highlighting the actors’ faces and emotions so clearly in sequences where this is so important.

In the background, a fantastic score was yet another technique used to reinforce the atmosphere, with inspiration from some really frightening films like Requiem For A Dream, There Will Be Blood and Starred Up really being used to effect as they made this play properly terrifying to watch.

However, probably the most terrifying thing about this play was the performances. Sani Husseini (although I predicted his character’s fate at the off) was petrifying, not only working well as the shy and unpredictable individual, but also as he became so much more intense, doing a great job of some evil monologuing.

The one person who I couldn’t predict at all was Sherief El-Shazly. In the opening stages, he was the stand-out performer for me; a great representation of a disturbed prisoner (with some brilliant extra help from the make-up department) who had such a dominating presence on stage that I felt scared every time he came on. However, his character’s development later on in the story was also very well-performed, as as he became dominated by Husseini’s character, El-Shazly still maintained the personality of the previously threatening man he was before, which I was very impressed by.

Camille Lewis was also another example of how petrifying this play was. I never thought that she could be so genuinely terrifying, but whilst she doesn’t provide any sort of violent threat or fear, her obsessive personality which almost lacks any sort of humanity was absolutely fascinating to see, and really chilled me to the bone.

In contrast, there was luckily a little bit of remorse in this story thanks to Ben Bauman’s character. The only seemingly humane character in the whole play, Bauman provided an excellent opposition to Lewis in this play, showing us that despite his genius ability to create this drug, there was still some horrific injustices that led to the atrocities of the experiments, with the story showing little sympathy for the morally conscious.

Finally, Adam Zinkin, whose character provided the audience’s view into this whole scenario, was fascinating. Whilst his character isn’t so significant in the development of the story, he is one of the most integral, as he provides the window into the lives of the prisoners, through his brilliantly tense interviews, and a clear description of the goings-on, making this play so much easier and more interesting to understand.

Overall, then, this gets an 8.7, because everything was pretty much perfect: the writing, the acting, the technical effects, and that really heavy-impacting atmosphere, which is still making me shiver…