As the legendary video game series reaches its final chapter, let’s take a look back to see how the six films stack up against each other. Whether we’ve truly reached the end remains to be seen, but for now, here are all of the Resident Evil movies RANKED.

All the Resident Evil movies have faults, but they all still have moments of comical entertainment. Except for Retribution.

Still pushing the ugly 3D from the previous installment, Retribution is full of ghastly CGI and editing that makes it an absolute mess, and not in a fun kind of way. Five films in, Milla Jovovich’s performance as Alice isn’t quite as spirited as it was in the early days, and the film takes on an unwarranted serious and dramatic tone, all the while hyping itself up as a proper blockbuster.

It’s all pretty poor, but the one thing that makes Retribution easily the worst in the Resident Evil series is its bizarre opening. Trying to change up the formula, it begins with Alice living as a suburban housewife when, all of sudden, zombies attack! It’s an unnecessary and uninteresting attempt at bringing more depth to the character, and almost laughable when put in context of how fun-loving the rest of the series is.

Up until Afterlife, the fourth film in the Resident Evil series, things hadn’t been going too badly. However, after jumping on the ugly bandwagon of thrusting newfound 3D technology into filmgoers’ faces, it’s a messy and largely boring watch.

Whilst it features a few brief moments of the film’s most entertaining and ridiculous villains and action, Afterlife, the first film directed by Paul W.S. Anderson since the original, takes itself far too seriously as an action blockbuster, and really loses the popcorn quality that makes the earlier films proper guilty pleasures.

What’s more is that the plot is pretty inactive for the majority of the runtime. Trying to mimic a siege war thriller, Afterlife gets cooped up in one location for too long with too little story to make it work. And when it finally does break out, the ending is so underwhelming that it’ll make you wish it all ended there.

Whilst featuring some of the most entertaining moments of the series, it takes a while for Resident Evil: Extinction to get up to speed.

The first half of the movie is painfully slow, and verging on taking itself too seriously. Whilst the story is moderately interesting, watching a band of survivors traverse the desert Mad Max-style, the presence of the fun-loving craziness of the first two films means that there’s a real clash between the storytelling aspect, and the popcorn action.

Fortunately, it sorts itself out for the final act, bringing the film to a close with a lengthy but massively entertaining action finale that’s full of all sorts of the mad sci-fi that makes this series so fun. With a bigger budget too, the film looks a lot crisper, and that helps to make it hugely enjoyable when it all kicks off, despite the disappointing start. 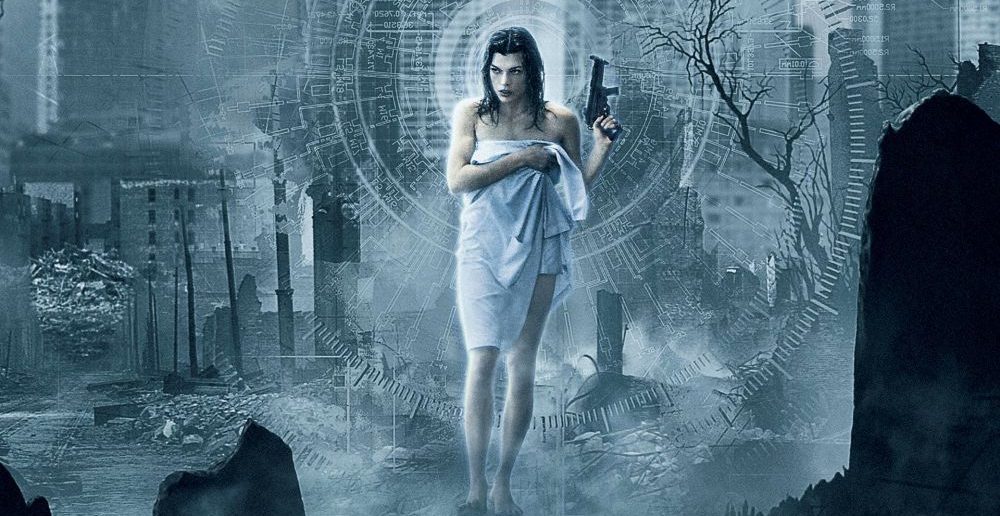 If there’s a prize for a sequel that perfectly matched the original, then Apocalypse has to be right up the top of the tree.

Whilst it’s by no means a brilliant film, Apocalypse is the ultimate guilty pleasure of the whole series. Kicking off with some of the most insane action you’ll ever see (note the motorcycle, backflip and machine gun), and continuing at an impressive pace from start to finish to make for a properly entertaining watch.

Surpassing its predecessor in scale and story, the film is exactly what popcorn entertainment should be. It’s fantastically silly, but its comic sensibilities make it all perfectly enjoyable. And what’s more, there’s even a surprisingly unpredictable twist ending that presents the series’ only moment of emotional depth.

It’s so often the case that the first of the series is the best, and although that’s not quite the case with Resident Evil, it comes mighty close.

Starting brilliantly with a tense, atmospheric and genuinely interesting story that matches the video game genre very well, the film remains a properly entertaining action/horror flick from start to finish. It may look as dated as the early 2000s can be, but with some eerie direction, a cool soundtrack and a perfect sense of humour that never means the film takes itself too seriously, there’s a lot to love about the first Resident Evil.

Of course, it’s still a guilty pleasure because it’s not a work of art. The story is pretty predictable, and the cliffhanger at the end feels a little unearned, however when all you want to see is Milla Jovovich shooting zombies in the head, then this is almost as good as you can get.

There’s one film in the series, however, that I don’t really see as a guilty pleasure, but more as a purely entertaining action movie, and that’s The Final Chapter.

Reintroducing some of the series’ best characters for one last ride, Alice’s quest to bring an end to the T-Virus is actually pretty riveting. It’s by no means an intelligent or hugely unpredictable story, but what The Final Chapter manages to do well is change up the story we’ve seen five times before a little, and yet give us exactly what we want.

And what do we want? Backflips. Machine guns. Zombies. Heads. Exploding. It may sound dumb, but that’s what the Resident Evil series is there for, and no film delivers on that premise as well as The Final Chapter. Its longer running time feels warranted, its higher budget isn’t squandered, and although it may look a little drab, coupled with some excessively hyper editing, it doesn’t take itself too seriously, and makes for a properly entertaining conclusion to the series that both works on its own, and nicely ties up some loose ends too.