It’s one of the silliest movie franchises to ever hit the small screen, but it’s defined the decade as much as any other. And now, following the release of The Last Sharknado and the (apparent) end of the series, take a look back over the last six years as we see all the Sharknado movies RANKED.

(And in case you’ve never seen the movies, I’ll give you a handy plot summary for each one!)

You know the Sharknado franchise, but did you know that there was a brief attempt to establish a wider cinematic universe. Alright, it may not be as serious as that, but the two Lavalantula films, Lavalantula and 2 Lava 2 Lantula, are tied into the Sharknado Cinematic Universe by an appearance from Ian Ziering’s Fin.

If you haven’t seen them, don’t worry, because they’re both a bit of a waste of time. Following the exact same premise as Sharknado, but with the sharks replaced by giant fire-breathing spiders, you’ll likely end up pretty bored with both of these films, as they lack the fun-loving idiocy of the Sharknado movies, and really lack when it comes to an even slightly original story.

The first one, where as tornado of sharks decimates San Francisco.

Here we are, with the very first Sharknado. Then just another ridiculous creature feature from the studio that brought you Nazis At The Centre Of The Earth, Titanic II and 2-Headed Shark Attack, nobody could have foreseen at the time that this would be the dawning of a franchise of SIX feature films.

In all truth, the original is the worst of the series simply because it lacks the deliberate so-bad-it’s-good quality of the later movies. It’s definitely not made as a serious piece, but much like many of the lesser-known B-movies we see on Syfy week in week out, its low budget, poor acting and lack of humour make it a really rather dull watch. If you’ve watched all the movies, go back and watch the first again – I guarantee you’ll be bored within seconds at just how ordinary it is. 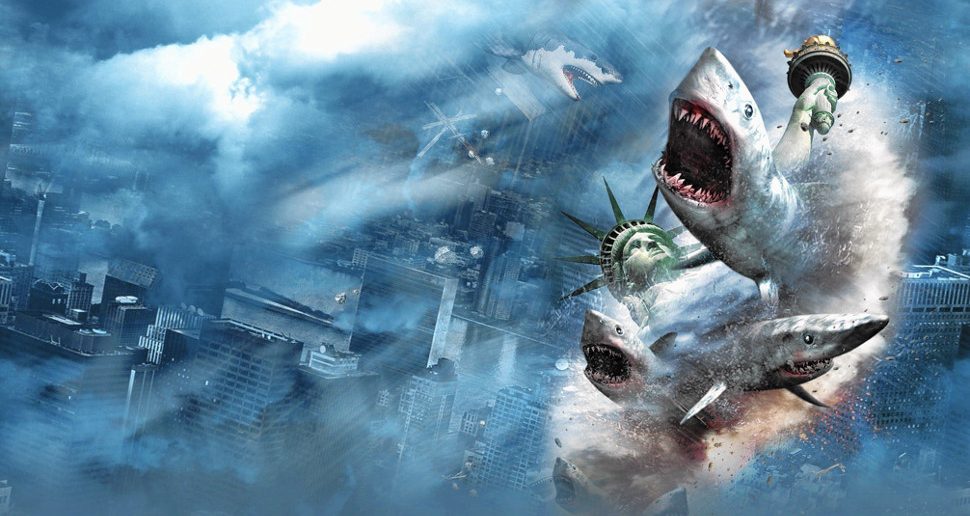 The second one, where a tornado of sharks attacks New York, and destroys the Statue of Liberty causing its head to roll through Manhattan crushing innocent people.

Second time out, things start to get a lot more deliberately silly. Sharknado 2: The Second One opens with a shark storm attacking a passenger plane at 30,000ft, and features the first appearance of the series’ ridiculous (yet catchy) theme song.

With that said, the sequel is largely identical to the first film, with only some improved humour, a more charismatic performance from Ian Ziering, and the hugely entertaining Statue of Liberty-head-rolling-down-the-street sequence proving highlights to set it apart from the original.

The one where tornadoes of sharks spring up all over the US, attacking the White House and Florida. Also David Hasselhoff appears as Fin’s father and ends up fighting sharks in space.

After two instalments, the makers of Sharknado really caught onto the popularity of the franchise. So, for the third film, Sharknado 3: Oh Hell No!, the ante goes up a little more, with the opening act focusing on a Sharknado attack on the White House, before things settle back into the more typical formula as the gang try to save Florida, and then the whole US, from destruction by Sharknado.

Oh, and then David Hasselhoff arrives in the third act as Fin’s father, a former astronaut who ends up taking the fight to the sharks as they’re launched into the stratosphere – featuring what is arguably the series’ most ridiculous moments as Fin is eaten by a shark in outer space.

In that, the third film features some very entertaining moments, with some of the best action of the series, although the movie suffers in its middle act with an excessively slow-paced, character-focused trek across the country, and with very little shark action. It’s better than the first two, but still not quite at the full potential of the series.

If there were a prize for the best title of the series – or of all time – then Sharknado: The 4th Awakens would easily take it. Piggybacking off the phenomenon surrounding the release of Star Wars: The Force Awakens, this fourth instalment is where the series goes fully sci-fi.

No longer relying solely on the premise of a single storm attacking a certain location, the film really ups the ante with the introduction of robot April – after she was saved by a Twitter vote from being crushed by space debris at the end of the third film (don’t ask) – and a whole host of ridiculous sci-fi elements that take the film from silly shark B-movie to near blockbuster status.

On the one hand, the fourth film is one of the series’ most consistently enjoyable watches, with the first introductions of preposterous sci-fi that take the movie far beyond the increasingly repetitive sight of watching people chop sharks with chainsaws, and a good sense of humour that carries it well throughout.

On the other hand, it’s a movie that really lacks any memorable moments, getting a little too jumbled up in the idiocy of its sci-fi to let you properly sit back and enjoy the simple silliness of the shark action.

Fin and co travel back in time to fight with dinosaurs as they attempt to stop the first Sharknado from ever happening, also encountering medieval knights, cowboys, people partying on a random beach in the 1950s, and robot sharks 20,000 years in the future.

You may have noticed a trend so far in this list: each of the Sharknado movies getting better year on year, as they became more aware of their silliness, and played into just that to make for an entertaining watch.

Well, the exception to that trend comes in the form of the series’ final instalment, The Last Sharknado: It’s About Time. As the title suggests, it’s a film that feels a little tired of the generic and repetitive nature of the previous five films, so in order to try something a bit different, it follows the gang of shark-killers as they travel through time, trying to stop any of the previous sharknadoes from ever happening.

Now, there’s no doubt that this film is off the scale when it comes to preposterous sci-fi, with the extensive time travel a far cry from the very basic nature of the first film back in 2013, but that does allow it to act as what I think is by far the most impressive film of the series, complete with better acting, visual effects and even costume and production design than ever before.

However, while the movie is very entertaining at some moments, it also feels a little too big for its boots, with the focus being shifted from the threat of Sharknadoes to actually telling a story about the main characters, something that’s executed rather poorly, and in all truth isn’t that interesting given the lack of depth in any of the characters.

It’s a far better film than the series was at its outset, but as far as an epic conclusion to the silliest series of all time is concerned, The Last Sharknado is a little underwhelming, moving away from a ridiculous premise that had served the series so well for five films, and making something that just isn’t as gleefully entertaining.

Sharknadoes appear all over the world, from London to Tokyo, Rome to Cairo and more, as Fin crosses the planet using the Sharknadoes as teleportation devices to stop Earth from meeting the apocalypse.

None of the Sharknado movies are good films. At least objectively speaking. But, if there were one that I would say I genuinely enjoyed right the way through, it would be Sharknado 5: Global Swarming.

Taking the series onto a worldwide scale, the movie follows Fin and the gang as they teleport across the world killing sharks, and become ever more drawn into a world of science fiction, as the series’ first allusions to time travel are introduced, setting the basis for the following instalment.

Combining the sheer ridiculousness of the sci-fi introduced in The 4th Awakens, as well as the simple pleasure of watching sharknadoes tear up the planet, Global Swarming is easily the series’ most balanced and enjoyable watch of all, with good humour throughout being well complemented by big action sequences that are an absolute joy to watch.

Even after five films, Global Swarming manages to keep the series feeling as fresh as possible, and capitalises on all of the internet popularity available to go out in one immense bang. Again, it’s no Citizen Kane, but it’s a genuinely epic movie that made me laugh right the way through, and that’s why it’s the best Sharknado movie of all for me.